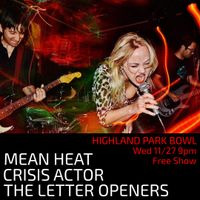 Mean Heat, 11PM
Built off of a chance meeting in the high-desert, Greg Coates, Symon Coak, & Ted Sluyter drove the wrong way down a one-way. Going into Rancho de la Luna Studio without any finished songs, allowed their formation and creation to be heavily informed by their surroundings, their compadres, and...their sheer panic. The result is a post-punk meltdown that has been fully realized by the indoctrination of the final piece, Alex Yalen. (Lucky number) 13 songs produced by Dave Catching, Engineered by Jon Russo, Mixed by Jon Russo, Luke Ehret & Symon Coak, and Mastered by Michael Hateley. You're welcome...

Crisis Actor 9:30
Rising out of the ashes of the past and coming to a False Flag Operation near you Influences Iggy and the Stooges, The Skulls, Smogtown, Dillinger 4, DOA, the Jam, the Damned, the Briefs, the Stitches, the Cramps, TSOL, the Weirdos, Stiff Little Fingers, the Adverts, the Dead Boys, and way too many other bands to list.